We (my wife, Dorothy, our cat, Kruimeltje and I) arrived in New Orleans. It was hot and sticky that day, it looked and felt just like I imagined it would (on the way there we’d also visited New Iberia where Tabasco sauce is made and the movie Electric Mist was filmed… so we were well in Louisianna mode). Driving to our RV resort on Lake Pontchartrain we passed over long bridge-roads built over swamplands, then through old neighborhoods and past graveyards. All burials are above ground, so many large creepy vaults, drooping trees and statues provide the ideal location for a voodoo ghost story… or a voodoo doughnut come to think of that!… I haven’t had one of them since Dorothy snagged a couple from the shop along the road the last time I played in Kells Irish pub in Portland, Oregon.

Michelle, my tour manager, had lined up four gigs for me that week. The Friday and Saturday playing at the Irish House, the Monday playing music for the Irish house Whisky tasting (it’s a hard job, but someone’s got to do it!) and the following Thursday at the Old Point Bar across the Mississippi in Algiers.

We went along to the Irish House on the Thursday to check it out – the temperature had plummeted and cozy jackets, scarves and hats had to be dug out of the RV wardrobes. The Irish House is on St Charles Avenue which is one of the main streets leading into the French Quarter. There’s also a handy tram which goes past it right to (and from) the French Quarter. It is more of a restaurant with a pub bit – the food was fantastic – the owner, Chef Matt Murphy has won several awards and has made this place an Irish “Gastropub”. The stage was all set in the middle of the side wall with a small Yamaha PA system… (hmmm… thanks, but no, I’ll bring my own). For the rest it looked like a grand place to play, so we finished our drinks (the guinness was excellent) and leaving our truck parked outside, we hopped on a tram to the French quarter to sample the delights of a cold New Orleans afternoon. When we returned hours later, the Irish house had a guy playing mandolin accompanied by a lady playing fiddle downstairs and a sea shanty choir assembling to go upstairs to sing – this was a busy, active place. 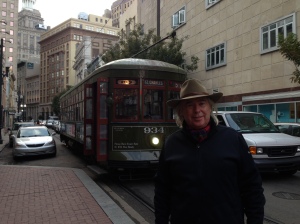 The gig on the Friday was good, every table was full and there was a fine buzz. I played three sets, mixing it all up a bit and knew that the people there had had a good night – I had played well, sold CDs and met some very happy people. On Saturday, the stage had been moved to the bottom of the restaurant facing the tables (instead of in the middle as on Friday) to make a space for a big screen which was showing the local football team’s game which was on while I was playing… sigh, bummer. As it turned out most heads were turned towards me and not the screen (most people there were visiting and not locals) and I was getting a reasonable amount of participation. During one of my songs, I couldn’t believe my eyes as Feargal MacConuladh, my friend from years ago and musical partner in our duo, Keltic Fire, walked in. He now lives in Barcelona, Spain and was over on business. His product, the Minecraft Gameband, had just been released and launched onto shelves in Target all over the USA. Feargal was traveling around meeting with Target people and was heading for Houston, Texas when he saw my Facebook post that I would be in New Orleans, so he headed over to the Irish House. The fact that he had lost his passport in Charlotte airport was a wee bit of a worry – but didn’t stop him! 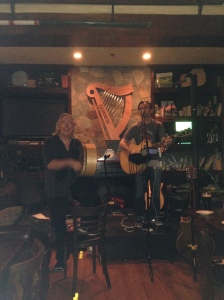 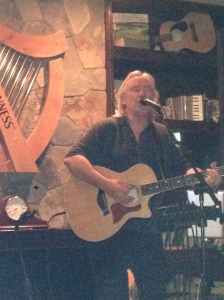 We had also made friends in the pub with Sally and Brendan Kelley, just visiting from Ohio (we met them on the Thursday and immediately hit it off) and locals Shannon Woodward & her Helicopter pilot husband – Shannon had a great voice and was singing along and harmonizing, Sally and Brendan had been at a 60th birthday earlier that day… so were in “high spirits” 🙂 . Feargal eventually caved in to pressure and played a few songs with me – it wasn’t quite like old times – we were a bit rusty … but still ok. After I finished at around 10:30pm, we had a wee jam session until midnight. We packed up the gear, Dorothy headed off to our RV and Feargal and I headed into New Orleans to catch up, reminisce (over a wee drinkie or two) and have fun. I got home at 4am after Feargal had just plain run out of steam… he was exhausted… as a newt! 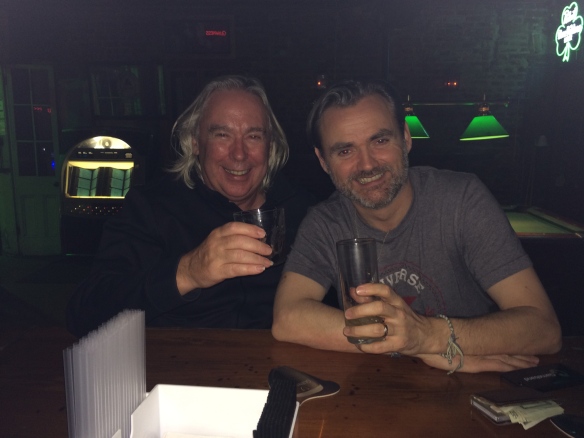 The whisky tasting on the Monday was a fine event, the Glenfiddich rep was there with 5 bottles of different Gelnfiddichs. I played some Scottish songs to get us all in the mood then we started tasting – each whisky had a delicious wee dish of food served with it…. the beauty of a Gastropub ! They served a dainty scotch egg – which was a quail’s egg wrapped in breaded sausage meat – instead of the huge ones we’d get in Dundee (fae big chookie burdies 🙂 ). the Gastro version, I have to say, was a wee bit superior to those I used to eat!

After the tasting there was an Irish music session, I didn’t join in as Dorothy was needing fed 🙂 … so we had dinner there and I got to know Chef Matt Murphy a bit better when he joined us (he’d been playing the bodhran in the music session). Matt is a fascinating character – from Dublin. Feargal and he had spent time on Saturday talking about their home town .. a thickening of accents was noticeable on both of them. He is a champion chef, a well-known New Orleans personality and one of the few survivors of a deadly flesh-eating disease. “Sure, I’m  more famous for surviving the disease than I am for me cooking and me restaurant…. ” he grinned modestly. A fine lad is Matt, he also set me up with a great recommendation “Bill played here last weekend and took the roof off… ” and put me in contact with a friend of his who may book me in Florida next year and a musician friend who has a list of contacts I could use to get some gigs arranged next year. Great stuff!

On the following Wednesday, Dorothy and I headed over to Algiers to check out the Old Point bar. It was on a road just behind the Levee on the west bank of the Mississippi. An old neighborhood pub which proved once again that you shouldn’t judge on first appearances as it was old and crumbling on the outside but friendly and full of character on the inside. The people were extremely friendly, as were the dogs, it was a wee bit smokey as the smoking ban hadn’t reached there yet and it had a great stage with a very serious sound system – which I would be happy to use the next day. There was music there each evening but Dorothy and I didn’t wait around – we walked along the Levee with beautiful views of New Orleans from across the water and caught the ferry across the Mississippi to the French Quarter – the weather had improved that day and it was a lovely warm late afternoon – perfect for a sunset ferry ride to eat some gumbo, redfish and other Cajun delights. 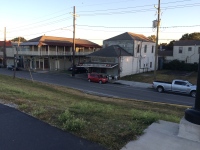 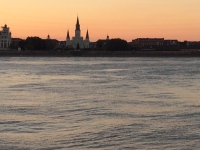 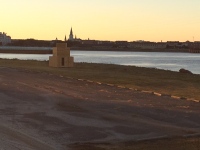 The gig on the Thursday was not well publicized. The posters we had sent over two weeks earlier hadn’t arrived or had been lost, there was a local paper and web site which told you what was on and where… but it only had my name, they hadn’t used any publicity materials from my website. As a result it wasn’t busy – but I have to say, those who were there all got into my music quickly and were singing, clapping, harmonizing, joining in and whooping with each song. I met a country singer (great voice) who had played Nashville for two years before giving it up – he told me about his appearance in the Ryman Auditorium – the old Opry, the epicenter of Country music (Dorothy and I were there for a show a few years ago). I could tell that was a memory that would stick with him all his days. There was a steady flow of people either visiting or returning from shenannigans over the water a wee bit the worse for wear. One such person was a nice looking lady with what looked like a colleague as they both had conference ID badges on a string around their necks. As he stood, or rather swayed, at the bar, she danced around the bar and did a pretty good pole dance in front of me using one of the old wooden pillars. She sang, hooted, danced, got everyone going… then sadly, after a while, left, blowing kisses to everyone, hooking her leg around a few last pillars on the way out while guiding her male colleague, who was sinking fast, out of the pub and into the night. I suspect his downfall had been trying to keep up with her 🙂 . I ended at 11pm … then as usual when it’s not been busy, a couple of people rolled in at 11:15 – one had just arrived from the airport – desperate for live music. I played them an acoustic song, they bought me whisky, gave me a tip and everyone was happy. The Old Point bar – a rare, bit tarnished, gem of a pub, well worth a visit if you fancy a Ferry ride and a chat to some of the friendly locals (you won’t find these everywhere in New Orleans). 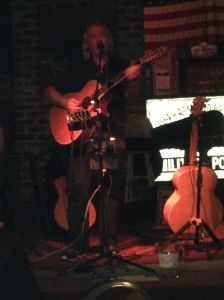