So, A wee while ago I mentioned that Steve and Cathi and Dorothy (and a few Spanish coffees) convinced me that I needed to make an album. Knowing how bad (read “Pernickety or even Persnickety”)  I am when I do my own recording, I knew I needed to get help. Steve Behrens (67 Music) had given me a list of potential studios, so I checked out their websites then called the one I liked best which was also closest to my house in Washington, Nettleingham Audio

I drove the 15 mins to Kevin Nettleingham’s studio – which was an add-on to his house, It was a “Doctor-Who” type of experience, from the outside it was a fairly normal looking house and garage. You enter the garage and it turns into this large expansive music-zen wood and acoustic tile lined area that somehow managed to fit behind that humble garage frontage. Entering along the woody-smelling corridor with guitar on stand, sofa, nice coffee machine, nice pictures leading to massive space shuttle-worthy soundproof doors leading to a large control room or the vocal room which in turn (through another wonderful  sealed door) leads to a large band recording room. Nice, Nice, Nice.

The next question was Kevin… would I like him, would he like me, did I think we could “make sweet music together”. After he had shown me round his audio palace, he fired up his computer system and let me hear some of the things we was working on with other artists. I heard maybe four different snippets of songs – enough to tell me that Kevin is a craftsman who believes in high quality and no messing! I loved what I heard – knowing that if mine turned out half as good, it would still be 1000 times better than anything I could do on my own. We got on very well, he was easy to work with and we felt comfortable with each other. We agreed prices, agreed to spend 2 x 3days recording with an extra day for mixing and mastering –  we shook hands, set the dates in December and off I went to get ready.

Everyone records themselves – unless you are the truly gifted 1%, it starts with the enthusiastic “I’m going to really show people what I can do” start and ends with the “… is that really what I sound like ?…” anticlimax.

Sessions in my bedroom at my mums house with my dad’s Grundig reel-to-reel tape recorder were great times (once I got used to what I did sound like). No multi-track then, we (me and my pals) would all cluster round the microphone and play and sing our hearts out! No-one liked the sound of their own voice… but remember, our voices were breaking and unintentional yodels were frequent!

Several years later, I thought I had hit the big-time, I got a Tascam 4-track cassette recorder, the world of multi-tracking opened up before me! On my own I could record and record until I sounded like a full band with a choir, as long as you didn’t mind uncorrected mistakes and the decrease in sound quality when you bounced 3 tracks onto the 4th track to free the 3 tracks up for more recording delight 🙂

Time marches on again – living in the Netherlands now and working for Apple, Feargal and I (Keltic Fire) got serious about making a CD. Feargal had a pretty cool soundproofed room, mixer, digital sound board and a powerful Mac with recording software! By this time we both had money to spend – the equipment wasn’t the problem… our problem was time. We had started to record our CD, spending time we couldn’t afford to spend in his home studio mostly failing to produce anything we were happy with – the working title of the CD was “Stolen Minutes” We did have a lot of fun (mostly un-productive) and his wife Marjolijn made us a ton of ham and cheese toasties (with ketchup) – we we happy – but had no CD.

While we were struggling with “Stolen Minutes” Feargal moved to Orleans (South of Paris) for a new job, set up another studio and we set a date for us to spend a week there at his old fashioned creaky French country house. I drove down and we worked round the clock for a whole week and I drove back to NL exhausted at the end of the week with a shiny self-mastered CD which had become “Almost Traditional”. When I knew I would be moving to the USA in 2007, we put in another mammoth effort and produced our 2nd CD, “The Bottom of the Road” just before I left.

Looking back at those recording days, we really worked hard and totally ineffectively, spending hours wrestling with software and hardware glitches and playing songs which we had never done before just learning as we went… it was exhausting – but rewarding.

Ok – now what? Ah yes – Spanish coffee… a professional musician (I still love that job title!) but what do you do? Hmmm… Become popular ? Learn more? play more ? perform more?  travel more? … At the age of 57 starting a new career…  Spanish coffee with Dorothy and our friends Steve and Cathi ( from 67 music) seemed like a great idea. 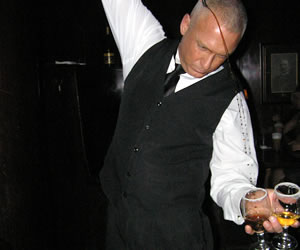 Downtown Portland, Saturday, end November, 4pm, happy hour ( 2 hours actually… but American happy hours can stretch a whole weekend!) Hubers bar and restaurant (one of the oldest establishments in Portland) do an incredible Spanish coffee ( they are the biggest consumer of Kailua in the USA as a result) – this was the ideal location (and ingredient) for a “… now what… ” brainstorm. It was obvious and not a new idea – we concluded I needed a CD … as a priority. How else can people know what I sound like and be confident hiring me if they have never heard me. Groan… recording…. I’ve done it before, all that excitement and drive you have at a live performance, missing, the focus you have while playing live, missing, the forgiving crowd, missing… In my experience, recording was always a bit scary – you re conscious every second that what you play is captured  – for  ever…  and you will be judged! I had also come to the conclusion that I was the wrong person to also be the recording engineer. I have recording equipment and software but any time I use it, I seem to spend 80% of the time getting the equipment and recording set the way I want it and 20% of the time actually playing music or singing… and the constant voice in my head whispering “start again, you could do better”.

Looking back, it seems like a small thing – but it was a big, grown-up, professional musician kind of step that took me from the fiddling around with music and equipment in my good, but clearly not state of the art, purpose-built home studio to the fully professional, you’re paying money, you’re serious, recording palace which is Nettleingham Audio!